President
Sandy’s passion for demolition is unmatched in the industry. He has been the driving force behind Jackson Demolition’s continued expansion since 1978. Since that time, Sandy is involved in every project that is undertaken; from single commercial structures to 1600 acre chemical plants. Under Sandy’s leadership Jackson Demolition has grown from a local operation to a nationally renowned industry leader. 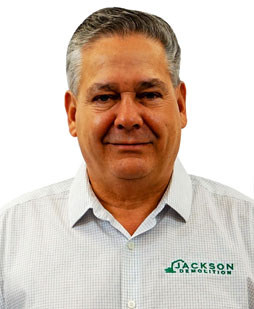 To be considered for employment this application form must be completed and signed personally by the applicant.
Each question must be answered in full, even if a resume is provided. If an answer is NO or NOT APPLICABLE, please indicate.